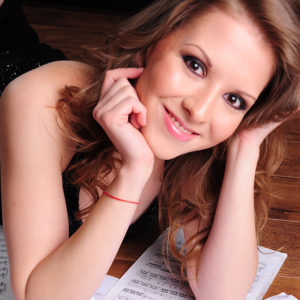 Born in the region of Transcarpathia in the Ukraine, Syuzanna was brought up in a Hungarian environment in a family of musicians. Her musical education began at the early age of five. Over the years, Syuzanna has appeared in many leading concert stages, most notably at the Wigmore Hall, Purcell Room and Chapell of Bond Street in London, Bridgewater Hall in Manchester, Plus Flagey in Brussels, Ehrbar Saal in Vienna, the Colony Hall of National Philharmonic in the Ukraine, Petit Palau in Barcelona, Sala Sao Paolo in Brazil amongst many others.

Syuzanna is a graduate of the National Music Academy of Ukraine where she studied under the Honoured artist of Ukraine prof.Valery Kozlov. She then continued her studies at the Royal Northern College of Music, with the Head of Keyboard Department and a renowned British pianist Graham Scott. Syuzanna was one of the two winners of the prestigious ABRSM Scholarship for the year of 20112013 that kindly supported her Master of Music Degree Programme studies at the RNCM. In earlier years Ms.Kaszo has also benefited from support of the Barbara Silverstone Bursary, the F W Wright Scholarship.

During her studies in the UK Syuzanna has won many awards, including the Beethoven Performance Prize, Concerto Performance Prize and Bakszt Memorial Prize for performance of Chopin at the RNCM and a 4th prize at the Sheepdrove International Piano competition (UK).

Her latest international competition successes and appearances included a victory at the XVI Stefano Marizza Piano Prize during October 2012 in Trieste, Italy, a Bridgewater Hall performance at the “Reflections on Debussy” festival, organized in collaboration with the RNCM and under the leadership of Noriko Ogawa, and a performance of Prokofiev’s Second Piano Concerto with RNCM SO under the baton of Gergely Madaras earlier that Year.

Notable Festival appearances count the Judith Weir, Steve Reich, Watford and Newbury Spring Festivals in the UK, Zemplen and Bartok Festival in Hungary, Mozarteum in Salzburg, Tbilisobo in Georgia, the Pianotexas Music Academy and Festival supported by Cliburn Foundation in Forth- Worth.

Through her performing career Syuzanna has collaborated with many major orchestras in the Ukraine, such as the National Symphony Orchestra of Ukraine, EstradnoSymphonic Orchestra of Ukraine, Dnepropetrovsk Philharminic Orchestra, Uzhorod Camerata, Harmonia Nobile under conductors Volodimir Sirenko, Mykola Sukach, Victor Zdorenko, Anatoly Zatin and Natalia Ponomarchuk among others.

Syuzanna is an eager chamber musician and often appears on stage with singers and various chamber ensembles.

As of August 2016 Syuzanna has joined the outstanding music department of Texas Christian University on their Artist Diploma program where she continues her artistic development under the mentorship of Dr.Tamas Ungar.

Future engagements include performances across the UK and US.