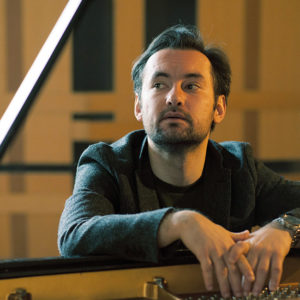 Russian pianist Timur Mustakimov was born in Nizhnekamsk, Russia, and began studying piano at the age of eight with Tatyana Kiseleva. At the age of twelve he won the regional piano competition in the Republic of Tatarstan. Mr. Mustakimov entered the Professional Music School for Gifted Children in Kazan where he studied with professor Alfiya Burnasheva and won the top prize in the Bach competition.

Mr. Mustakimov was a prizewinner at the Russian Piano Competition (Ufa, Russia) and the International Piano Competition (Kiev, Ukraine). In 2006 he entered the Kazan State Conservatory, and during his first year he represented the conservatory at the International Conservatory Week Festival in Saint Petersburg, Russia. He has performed with the Symphony Orchestra of the Republic of Tatarstan. In 2008, Mr. Mustakimov participated in the PianoSummer Festival in New Paltz (USA) and won 1st prize in the Jacob Flier competition. Mr. Mustakimov performed Rachmaninoff Piano Concerto No. 2 with the Hudson Valley Philharmonic under the baton of Vladimir Feltsman and, as winner, was offered to perform his debut recital in America, opening the PianoSummer Festival the following year in 2009.

He was offered a full scholarship for the Master of Music degree in 2009 at Mannes School of Music, then continued his studies under the tutelage of Vladimir Feltsman in the Professional Studies program. As a winner of the Concerto Competition at Mannes, Mr. Mustakimov performed Beethoven’s “Emperor Concerto” at Alice Tully Hall in 2013. He is also the Gold Prize winner of The 2013 Heida Hermanns International Competition (Westport, CT).

In 2014, he was the substitute guest artist with the Jupiter Chamber Players in NYC. Ever since Mr. Mustakimov has joined the artists roster of the festival and performed in the 2016 and 2017 Spring seasons.

The Gold Prize winner of the 2015 NTD International Piano Competition, his performance from Carnegie Hall was broadcast globally by NTD Television. NTD company has made a documentary on him and is also organizing a solo debut recital in NYC which will be broadcast worldwide. In Spring 2015, Mr. Mustakimov became the youngest nominated member of The Musical Fund Society of Philadelphia, the oldest continuing musical organization in the United States. He has also been asked to perform several recitals throughout the USA.

Timur Mustakimov completed his doctoral studies at Kazan Conservatory in 2015, with the topic of his final project being the music of Russian composer Nikolai Myaskovsky.

Mr. Mustakimov was selected as one of the eight pianists to participate in the Music Academy of the West in Santa Barbara in the summer of 2016. He was also the Gold Prize winner and audience prize recipient at the Midwest International Piano Competition
of 2016. Timur recorded a CD with Blue Griffin label this year as part of his award titled
Late Russian Romanticism, featuring works by Scriabin and Myaskovsky.

Timur Mustakimov is prize winner and audience choice recipient award at the 2017 Premio Internazionale Pianistico A. Scriabin held in Grosseto, Italy. In April 2017 Mr. Mustakimov closed the piano series at the Naples Botanical Garden in Florida, featuring the past first prize winners of the Heida Hermanns International Competition. This is the first concert series organized by patron Kristin Foster.

Mr. Mustakimov is currently a doctoral student, on full scholarship, at Temple University in the Piano Performance program with Dr. Charles Abramovic and is the assistant to distinguished piano professor Dr. Sara Davis Buechner.